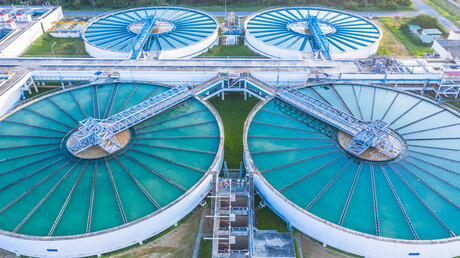 Membrane filters don’t require much energy to purify water, making them popular for wastewater treatment. However, to keep the filters in good condition, they’re commonly cleaned with strong chemicals which can sometimes destroy the membranes in the process. Now, researchers reporting in ACS Applied Materials & Interfaces have developed reusable nanoparticle catalysts that incorporate glucose to help efficiently break down contaminants inside these filters without damaging them.

Typically, dirty wastewater filters are unclogged with strong acids, bases or oxidants. Chlorine-containing oxidants such as bleach can break down the most stubborn organic debris but they also damage polyamide membranes, which are in most commercial nanofiltration systems, and they produce toxic by-products. A milder alternative to bleach is hydrogen peroxide, but it decomposes contaminants slowly.

One way to avoid these additional chemicals is to use the enzyme glucose oxidase, which simultaneously forms hydrogen peroxide and gluconic acid from glucose and oxygen. So, Jianquan Luo and colleagues wanted to combine glucose oxidase and iron oxide nanoparticles into a system that catalyses the Fenton-based breakdown of contaminants, creating an efficient and delicate cleaning system for membrane filters.

First, the researchers compared the removal of organic contaminants from polyamide filters by the glucose oxidase enzyme and iron oxide nanoparticles to other cleaning methods, including the traditional Fenton reaction. They found this approach was superior at breaking down the common contaminants bisphenol A and methylene blue, while also preserving more of the membrane structure.

Encouraged by their initial results, the team combined glucose oxidase and iron oxide into a single nanoparticle, connecting them with an amino bridge.

Finally, they tested the new nanoparticle’s ability to clean methylene blue-soaked nanofiltration membranes, which they fouled and cleaned for three cycles. After each cleaning cycle, the nanoparticles were retrieved with a magnet and reused with fresh glucose to activate the catalyst.

The nanoparticles were effective at cleaning the membranes, returning them to 94% of their initial water filtration capacity. Because the nanoparticles don’t require strong chemicals and are easily recoverable, the researchers say their new system is a ‘greener’ and more cost-effective approach for cleaning nanofiltration membranes.