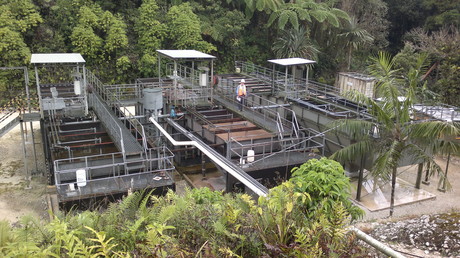 While the population of urban areas increases, every community, no matter how big or small or where it is located, needs to have an effective method of safely disposing of the sewage generated by the people living and working there to prevent environmental contamination.

Yet, while sewage treatment in remote locations can pose more of a challenge, special attention should be given to these areas as they are typically more environmentally sensitive than their urban counterparts.

When untreated or inadequately treated wastewater is released into the environment it can have significant environmental, human health and socioeconomic impacts.

Domestic sewage consists of household wastewater (from sources such as bathing/showering, dishwashing, laundry, toilet flushing, etc) and human waste which can contain a wide range of chemical contaminants, as well as pathogenic microorganisms that can cause parasitic intestinal infestations and communicable diseases such as giardiasis, cholera, typhoid, dysentery and diarrhoea.

Domestic wastewater often contains a wide range of dissolved and suspended chemicals originating from detergents, as well as pharmaceuticals, cosmetics and personal care products — collectively known as ‘emerging contaminants’. In addition, many soaps and household cleaning products contain high levels of nitrogen, potassium and phosphorus, which are plant nutrients that can cause an ecological imbalance if they accumulate in the environment.

The inadequate treatment and disposal of human waste can lead to soil, groundwater and surface water bodies becoming contaminated. Inadequately treated sewage is not only unsightly, it can also be odourous.

Discharged sewage can serve as breeding grounds for flies and mosquitoes, which may also feed on any exposed decomposing matter, transmitting disease to whoever they subsequently come in contact with. Domestic animals and livestock such as dogs and pigs, as well as rats and other vermin, may also be attracted, spreading the human faeces they come into contact with, and potentially also the pathogens that cause disease.

According to a United Nations report, domestic wastewater can contain high levels of excreted pathogens, many of which can cause gastroenteritis. It is estimated that 1.45 million people die every year from diarrhoea, with children under the age of six being most vulnerable.

58% of these deaths are attributed to limited access to clean water and poor sanitation and hygiene. People can become infected if they come into direct contact with untreated wastewater, or indirectly if they swim in contaminated freshwater or coastal waters, or if they consume food or drinking water that has been contaminated by wastewater.

Filter feeders such as shellfish are particularly prone to contamination and can make a person ill if they are consumed. Some species of fish can accumulate toxins in their tissues, which become more and more concentrated over the course of their lifetime.

When affected fish are consumed these toxins may pose grave health risks, particularly if they are eaten regularly, as these toxins may also accumulate in the body tissue of humans. This can be problematic in remote island or coastal locations that depend on seafood as a major source of protein.

In addition to the human health risk, inadequately treated wastewater can have significant ecological impacts too. Studies have shown that pharmaceuticals released with human wastewater can disrupt the endocrine system of aquatic animals such as fish and frogs, feminising males, which upsets the ecological balance and threatens biodiversity.

An abundance of phytoplankton limits light penetration and provides a food source for the larvae of the predatory crown of thorns starfish and filter feeding organisms, allowing them to thrive to the detriment of corals. In addition, flourishing algae, stimulated by the influx of nutrients, can outcompete and smother coral, inhibiting its ability to grow or recover. These environmental impacts can ultimately have significant health and economic impacts too.

A reduction in biodiversity in both freshwater and marine ecosystems can adversely affect commercial fisheries, which in turn can lead to loss of income or job losses. Artisanal and subsistence fisheries may also be affected, resulting in the loss of the staple food source for communities that rely on seafood as their main source of protein. Degradation of habitats, such as coral reefs and freshwater lakes, that support recreational activities can lead to a drop in tourism, resulting in economic losses as well as job losses in both the tourism sector and industries/businesses that support these activities. Considering that in many regions, particularly remote islands, the fishing and tourism sectors are vital to the economy, providing the primary sources of employment, the socioeconomic implications are significant.

Contamination of groundwater and other sources of drinking water can be costly to rectify. Contaminated water will need to be purified to render it safe to drink, and this treatment can be expensive, especially in remote locations.

Due to the lack of infrastructure at remote locations, sewage is usually treated on-site. Commonly used on-site sewage treatment options include composting toilets and septic tanks.

However, because sludge removal is not available at remote locations, disposal remains a problem. Typically, a septic tank system with a soak pit is employed. But contaminants leach through soils to pollute groundwater and freshwater bodies, and ultimately, coastal waters. A more efficient solution is required, particularly in areas that are ecologically sensitive.

The choice of the most appropriate sewage treatment process would depend largely on the space available on-site, as well as the location of the site and the discharge requirements.

While sewage treatment at remote locations can be a logistical challenge, primarily due to labour constraints, costs and site accessibility, it needn’t be so.

These plug-and-play units address some of the key challenges associated with sewage treatment in remote locations: they can be shipped anywhere as a flat pack and bolted together onto a concrete slab on-site; they are cost-efficient to set up and operate and the treated effluent that is discharged is of high quality and can be treated further with optional tertiary systems for re-use if required. These factors, combined with the fact that they are simple to operate and require very little maintenance, make them suitable for treating sewage in remote locations.

While sewage treatment may not be a top priority in sparsely populated remote areas, it shouldn’t be overlooked. The risk of groundwater contamination is the same as anywhere else, and the environmental, health and socioeconomic impacts may be much higher.

Hydroflux Epco, a member of the Hydroflux Group, is a water and wastewater business with over 1000 references dating back to 1961.