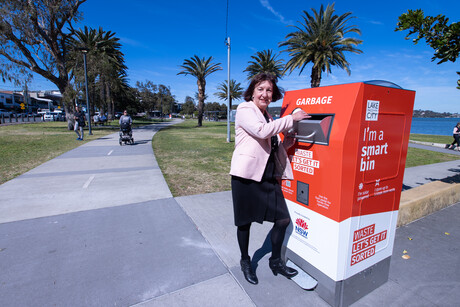 Smart solar-powered bins that crush garbage to increase the amount of waste they can hold are being installed in Lake Macquarie.

The RAY Smart Solar Powered Compacting Bins have been designed to improve the environment by preventing overflowing garbage being released into the lake. The first bins have been installed along the esplanade at Warners Bay Foreshore, with another expected for Toronto Foreshore in the future.

If the bins are successful, others could be installed elsewhere in the area.

“Not only will this be able to store more waste with a smaller footprint, but having a strong sealed hatch as a lid ensures no items will blow out into the lake,” said Lake Macquarie City Council Waste Strategy Coordinator Hal Dobbins.

Each bin can hold 1200 L of general waste, compared to a conventional bin’s limit of 240. This is achieved by compacting the garbage using the bin’s solar-powered crushing function.

Each device contains a 60 W solar panel which charges a battery that can run for up to four weeks with little to no sun.

Additionally, sensors inside the bins will alert the council when the bin has reached 80% capacity so a collection can be organised.

Lake Macquarie Mayor Kay Fraser said: “Warners Bay is a very popular destination which is close to cafes, restaurants, a large picnic area and a shared pathway, so these bins will efficiently store a large amount of waste where it’s needed.

“Another device will be installed at Toronto Foreshore in the coming months to reduce litter in the area, which has recently become popular since the installation of a new town green and picnic area.

“I would encourage residents to take advantage of these public bins and properly dispose of waste to prevent litter.”

The $30,000 bin project was funded through the Waste Less, Recycle More initiative and a Community Building Partnership grant.

Jodie Harrison MP Member for Charlestown said: “I was very pleased to support Council’s request for funds for this innovative solution for waste in the local area.

“More and more people are coming to the lake to relax with family and friends, so it’s important to keep the area clean and well maintained for people’s enjoyment.”

The pco.pixelfly 1.3 SWIR is a machine vision camera with an InGaAs image sensor that is...