Milestone reached in mine rehabilitation project

Energy Resources of Australia (ERA), the operator of the Ranger open-cut uranium mine, has reported a major milestone in its progressive rehabilitation program. Since open-cut mining finished at Ranger in 2012, ERA has committed to a closure plan to achieve full rehabilitation.

Tim Eckersley, general manager operations for the Ranger mine, explained that Ranger’s two former open-cut pits are being converted into permanent repositories for the mine’s tailings. Waste from the site’s milling operations has now been transferred directly to the mine’s last open pit, Pit 3, following careful preparation to ready the pit for storage.

“So far Pit 1 has been backfilled with tailings and preliminary rock capping put in place,” Eckersley said. “As of last month, Pit 3 began receiving tailings directly from our processing mill for permanent storage.

“In a couple of months we are scheduled to commission a dredge and infrastructure to transfer dredged material from the Tailings Storage Facility into Pit 3. We are also scheduled to begin brine storage in Pit 3 from the Brine Concentrator.” 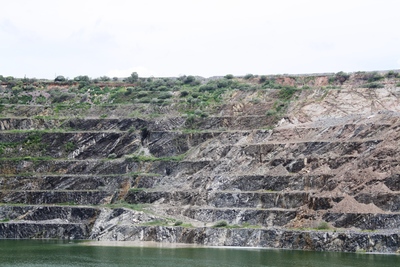 A ‘beach’ of tailings (waste material) has started to appear in the bottom of Pit 3 at Ranger.

ERA’s Brine Concentrator is treating process water from the site’s Tailings Storage Facility to reduce the operation’s water inventory. Brine, which is the residue from the treatment, will be moved to Pit 3 for permanent storage.

“Last year we completed the initial backfill of Pit 3, with more than 33 million tonnes of waste rock placed into the base of the pit, and the installation of in-pit drainage and an extraction pump system to convert the pit into a storage repository for brine and tailings,” Eckersley said.

“We’ve installed extensive drainage works across the floor of the pit, while a water extraction bore system has been installed to transfer water removed from the pit to the Tailings Storage Facility.

“Later this year we are scheduled to commission a custom-designed, stainless steel dredge built in Queensland to dredge tailings from the Tailings Storage Facility for containment in Pit 3.”

Once all waste material is moved to the pits for final long-term storage, the pits can be capped with rock and ultimately revegetated. The project will mark the latest achievement in ERA’s $378 million Ranger rehabilitation program.