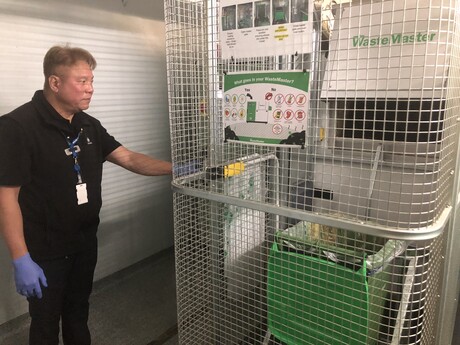 Epworth Richmond is participating in a three-year trial to turn food waste into fuel for green energy. As part of the trial, food offcuts are gathered from the hospital kitchen and dehydrated in a WasteMaster machine to create a powdered residue. The residue is then used as a fuel to generate green electricity at Yarra Valley Water’s anaerobic facility in Wollert.

In the first 12 months of the trial — funded by the City of Yarra and Sustainability Victoria — more than 20 tonnes of food offcuts and waste were used to generate enough electricity to power 1512 homes for a day.

“Becoming more sustainable is a priority for Epworth. We must protect the environment and ensure resources are used responsibly,” Waldron said. “The WasteMaster trial means that 72% of food waste was dehydrated and turned into electricity, diverting 20 tonnes of waste from landfill.”

A separate project has been launched to further reduce kitchen waste.

Epworth also has a PVC recycling program that has recycled more than eight tonnes of IV fluid bags, oxygen tubing and oxygen masks in the past year.

The PVC recycled by Epworth through Baxter Healthcare and the Vinyl Council of Victoria PVC Recycling Program is enough to produce 56 km of garden hose, 2788 children’s playmats or 10 playgrounds.

Epworth Group Sustainability Manager Simon Mikedis said any metal is removed from the waste PVC before it is recycled.

“That includes 15 kg of oxygen mask clips, which were also recycled,” Mikedis added. “The program diverted eight tonnes of PVC from landfill, saving more than $6000 in tipping fees, which is important as Epworth is Victoria’s largest not-for-profit private hospital group.”

Fugro partners with Nexxis to operate robots via satellite