Circular economy in Brisbane: from building waste to roads 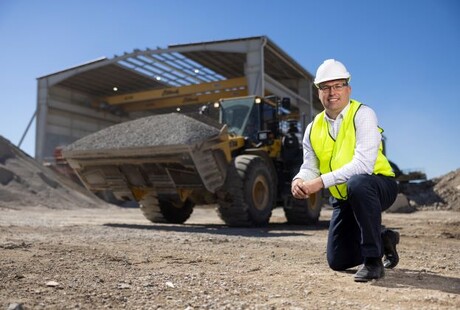 Concrete recycled from Brisbane buildings has formed the base for the $12.35m road upgrade in the city. Rino Recycling has provided 96% of the recycled materials used in the upgrades of Cedar Road and Macarthur Avenue at Northshore.

The project is managed by BMD for the Department of State Development, Infrastructure, Local Government and Planning and has involved upgrading key roads within Northshore Hamilton from the existing industrial accesses into thoroughfares that now service the residential, retail, commercial and recreational precinct.

Rino Recycling’s General Manager Daniel Blaser said the project was an excellent example of how recycled material from across the city can be used for major projects, rather than heading straight to landfill.

“State-of-the-art recycling of commercial building materials into a whole range of base materials absolutely should be the foundations of Brisbane’s next chapter of development. This is the future of development, utilising material that has been used before, to start again,” he said.

“The story only gets better when we share where the materials have come from; it invokes a sense of nostalgia, knowing that certain roads have a history. The base for Cedar Road, for example, comes from concrete out of the Mater Hospital, stands from Ballymore and the Bulimba Barracks.

“Additional concrete, brick and concrete washout came from the BP Refinery, Cross River Rail and Windsor Holden while fill has come from recycled material from the Port of Brisbane, Brisbane City Council buildings and a wide range of smaller buildings across the city. For the project to date, Rino has provided some 23,000 tonnes of the total 23,800 tonnes required.”

Blaser said Queensland had very low recycling recovery rates compared to the southern states, which have had landfill levies in place for much longer and as a result had much more mature recycling industries. “There is much room for improvement, development and smart management and investment, and Rino is taking a leadership position. Rino has recently gained certification to supply recycled material for road construction with the Department of Main Roads,” he said.

“The recycling and resource recovery industry is being recognised as key ‘infrastructure’ and will be pivotal in growing the circular economy of the future. It is our responsibility to ensure the environmental sustainability and safety of business is a priority.”

Historically and without the intervention of subsidies, the cost of collecting and sorting recyclable waste in Australia has been significantly higher than sending it to landfill. Following the 2009 National Waste Policy agreement between all Australian environment ministers, state governments have been implementing various strategies to increase waste remediation and recycling. The waste levy underpins the Queensland Waste Strategy, seeking to reduce waste disposed through landfill from 55% to 10% by 2050, with 75% recycling rates across all waste types. The Queensland Government has committed to reinvesting over 70% of the levy in waste and recycling initiatives. The Queensland levy applies to 38 of the 77 local government areas or 90% of Queensland’s population with waste generated inside the levy zones incurring the waste levy if disposed of outside the levy zones.

The pco.pixelfly 1.3 SWIR is a machine vision camera with an InGaAs image sensor that is...