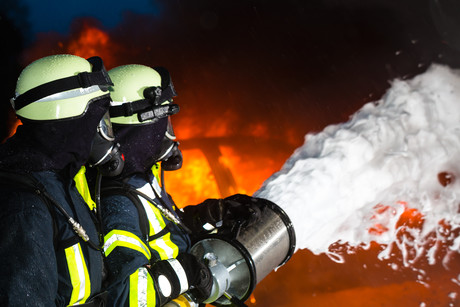 The ABC’s Four Corners program this week revealed that firefighting foam containing perfluorinated chemicals known as PFAS was used at Australian Department of Defence bases until as recently as 2012, resulting in severe groundwater contamination at 18 bases across Australia. But exactly what is PFAS and why is it so controversial?

PFAS (per- and poly-fluoroalkyl substances) is a group of manufactured chemicals used since the 1950s to make products that resist heat, stains, oil/grease and water. Until around 2004, PFAS compounds were present in aqueous film-forming foam (AFFF), a firefighting foam used at many sites within Australia to extinguish fires. PFAS chemicals are also used in non-stick cookware; fabric, furniture and carpet stain protection applications; food packaging; and many industrial processes.

So what’s the problem? For one thing, many PFAS compounds, including perfluorooctane sulfonate (PFOS), are very stable and do not break down in the environment. According to Associate Professor Stuart Khan, an expert in chemical contaminants in drinking water from the University of New South Wales, “These chemicals have practically indefinite persistence in the environment, meaning that there is effectively no natural degradation or remediation process.

“Furthermore, they are highly mobile, meaning that they will eventually reach groundwater tables, and then travel with the groundwater from one location to another.”

This news is particularly worrying given that PFOS was the subject of a technical review by the United Nations Environment Programme back in the early 2000s — a review in which chemicals expert Professor Ian Rae played a leading role. According to Professor Rae, the review concluded that PFOS was “toxic to some species in the environment and that its use should be restricted to situations where no suitable replacement was available”.

“Like so many of the substances we have banned or restricted — think [insecticide] DDT, for example — PFOS is especially effective in the uses it was designed for,” said Professor Rae, who is currently based at the University of Melbourne. “But of course, like DDT, it has bad effects on environmental species, and these impacts came to light only long after the substances were introduced.”

The evidence for environmental harm was sufficient to see PFOS listed as an organic pollutant by the Stockholm Convention in 2009, and came alongside similar concerns over PFOS’s potential to cause harm in the human body, as PFAS substances bind to fat proteins and are retained for a prolonged period. While there was never enough evidence to enable health professionals to identify a cause-and-effect relationship, according to Professor Rae, “there is justification for a cautious approach and for ways to minimise exposure to possible contamination”.

In May 2000, AFFF manufacturer 3M announced it was officially phasing out the controversial foam. That same day, US authorities warned the Australian Government that the foam’s key chemical ingredients potentially posed a risk to human health. Yet despite these alarm bells — as well as warnings from as far back as 1987 that the product must not enter the environment — the product’s continued use by the Department of the Defence saw many thousands of litres of the foam expelled onto bare earth or washed into stormwater systems.

When the Department of Defence eventually stopped using the foam in July 2012, the substance had contaminated the groundwater and even some local drinking water in the areas surrounding the 18 bases in question. In the case of the rural suburb of Williamtown, the location of the Royal Australian Air Force base, residents were not even informed about the outbreak until three years after it was discovered. Now the department is facing two separate class actions, representing almost 1000 people, which accuse it of negligence and seek financial compensation.

While the class actions will be messy enough for the Department of Defence to clean up, the real problem will be how they plan to deal with decades’ worth of contamination at 18 different sites. As noted by Associate Professor Khan, “It is possible to treat PFAS in drinking water, but the treatment processes are expensive and highly energy intensive.

“The most common processes are reverse osmosis membrane filtration and some emerging ion-exchange processes,” Associate Professor Khan continued. “The problem with both approaches to PFAS treatment is that neither actually breaks down or destroys the PFAS molecules — they merely concentrate the PFAS into a waste solution, which then requires disposal. Opportunities for safe disposal of that waste solution are currently very limited, so there is really no established sustainable remediation technique. The current techniques predominantly involve shifting the contamination from one location to another.”

Professor Rae was somewhat more optimistic in his outlook, noting, “Treating contaminated water with activated carbon (sometimes referred to as granulated activated carbon, GRAC) removes PFAS by adsorbing it onto the carbon. The carbon can then be safely buried in a secure landfill or — more likely — burned at high temperatures to destroy it and the PFAS. PFAS-contaminated soil can be heat treated to destroy the PFAS and some facilities of this type are already operating in Australia.

Perhaps the most promising technology so far proposed comes from OPEC Systems, which has been collaborating with the Department of Defence on downhole foam fractionation (DFF) — an approach that relies on the inherent physiochemical characteristics of the PFAS compounds to remove them from water. The company claims the technology can effectively isolate and remove longer chain PFAS substances from affected sites, removing more than 99% of PFAS within minutes.

DFF involves the installation of purpose-designed and strategically positioned groundwater wells at affected sites, and the creation of bubble columns within the wells which ‘foam out’ the PFAS compounds. The DFF system scavenges the PFAS contaminants within the foam, and a foam harvesting system is used to remove the PFAS-rich concentrate from the wells, where it is further refined before being taken off-site and subsequently destroyed at a waste destruction facility.

So perhaps Australia will be able to recover from this extremely misguided chapter in our history. After all, Professor Rae noted that a national environmental management plan for PFAS is currently being developed by the EPAs of the states and territories, together with the Commonwealth, and should be completed by the end of the year. The key to preventing something similar happening again, said Associate Professor Khan, is to manage the PFAS problem at the source.

“This means that we must pay much greater attention to managing our catchments and preventing chemical contamination from occurring in the first place,” he said. “This will require much more significant measures for risk management to be instituted for all industrial and government operations undertaken in current or potential future drinking water catchments.”