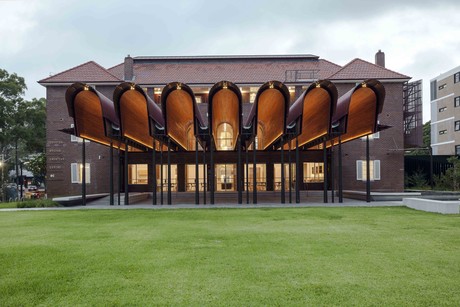 “We set out to make Green Square an exemplary model for sustainable, high-density living in Sydney by embedding green infrastructure into our planning. Because of this commitment, Green Square town centre features one of Australia’s largest urban stormwater recycling schemes, as well as tree-lined, low-speed streets and extra-wide footpaths, self-watering raingardens, separated cycleways and LED streetlights,” she said.

The Lord Mayor also pointed to the 104 affordable housing units in the town centre, allowing workers to live close to their places of work, and to the $540 million infrastructure investment, which includes:

“In Green Square, we’ve shown that high density living can be created with environmental, social and economic sustainability in mind and this award is a fantastic recognition of our efforts,” Moore said.

Green Square’s town centre sits at the heart of one of Australia’s biggest urban renewal areas, just 3.5 km from the city centre. Including the suburbs of Beaconsfield, Zetland and parts of Rosebery, Alexandria and Waterloo, the area is set to house around 7500 residents and 8600 workers.

The City continues to work with, and advocate for, the state government to bring education, health and more public transport services to the area.

For more information on the Green Star program, click here.