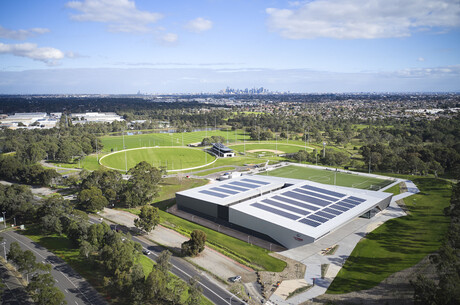 The Green Building Council of Australia (GBCA) has awarded La Trobe University’s new sports stadium a ‘6 Star Green Star Design and As Built’ rating for sustainable building practice. The stadium is reported to be Australia’s first sports building to achieve such an accolade.

The stadium — built as part of stage 2 of La Trobe’s Sports Park development — is a key component of the university’s plan to transform its Melbourne Campus in Bundoora into a University City of the Future.

The stadium features include:

Professor Russell Hoye, La Trobe Dean School of Allied Health Human Services and Sport, said the state-of-the-art stadium had transformed students’ experiences and was a valuable community asset predicted to have more than 10,000 visitors a week.

“The La Trobe Sports Park is now home to 26 sports clubs, the Northern Football Netball League, Softball Australia and Softball Victoria, and planning is underway to become home base for the Matildas, Football Victoria and Rugby Victoria,” Professor Hoye said.

“We’re very proud of the fact that we’ve been able to create this incredible facility while remaining true to La Trobe’s values of being sustainable, protecting our environment and aiming to achieve net zero carbon emissions by 2029.”

Completed in January 2020, the facility includes an indoor stadium with six multipurpose highball courts, a teaching and research building with world-class sport science and analytics research laboratories, and office space for commercial tenants.

Green Star is an internationally recognised sustainability rating system for the built environment. There are different Green Star rating tools, and the ‘Design and As Built’ rating guides the sustainable design and construction of schools, offices, universities, industrial facilities, public buildings, retail centres and hospitals.

All newly constructed buildings at La Trobe are certified at a minimum rating of 5 Star Green Star under the GBCA’s building rating system.

Roadmap paves the path for a sustainable bioenergy future

The Australian Renewable Energy Agency (ARENA) has released its Bioenergy Roadmap which lays out...

The City of Stonnington in Melbourne is inviting community feedback as it embarks on a smart...

Omicron: understanding the level of severity will take days to weeks — WHO

CSIRO combines best of humans and machines to reimagine AI