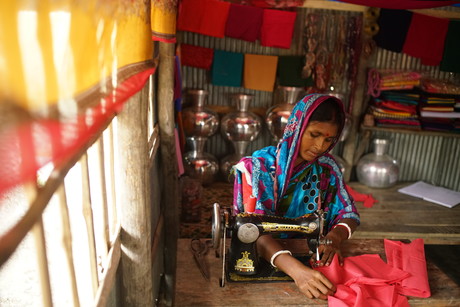 Baptist World Aid Australia has released its 2019 Ethical Fashion Report, examining labour rights and environmental management systems in the fashion industry. The report grades 130 apparel companies from A+ to F based on their systems and strategies to ethically manage their supply chains, with the aim of all workers having access to the correct working wage and basic human rights.

Following the Australian Modern Slavery Act 2018, the report highlights which Australian brands are making positive strides towards meeting these expectations and those that continue to fall behind. Although a third of brands have improved since the 2018 report, only 5% of companies can demonstrate they were paying a living wage to all workers at their final stage of production.

Australian brand Outland Denim ranked among the seven companies achieving an A+, while Kookai, Cotton On and Country Road achieved A- grades.

The report found that in the last year, 38% of companies have improved their overall grade, with a significant improvement across the industry in 79% of the areas assessed, including development in gender equality, responsible purchasing practices, child and forced labour, and transparency.

The 2019 report has seen the most substantial progress in traceability down the supply chain since conception of the report in 2013, a sign that accountability is starting to change behaviour.

“We know that the beginning of the supply chain is where the risk of child labour, forced labour and exploitation is most prevalent, so it’s encouraging to see from the report that more companies are taking proactive action to identify and mitigate these risks,” Hickey said.

This year, in addition to the four key grading criteria: policies; transparency and traceability; auditing and supplier relationships; and worker employment, environmental management has been added as a fifth criterion.

“The new criterion evaluates a company’s ability to report and address a range of aspects in environmental management including emissions, materials, water use, wastewater and chemical use,” Hickey explained.

He commented that although improvements are being made, there is still a significant amount of work to be done regarding living wages.

“With only 5% of companies able to demonstrate they are paying a living wage to all workers at the final stage of production, it is evident that living wage is a continued challenge we face each year. It’s disheartening to see companies are choosing to neglect this aspect in ethical manufacturing and we hope to see this change significantly as the requirements of the Modern Slavery Act come into play,” Hickey continued.