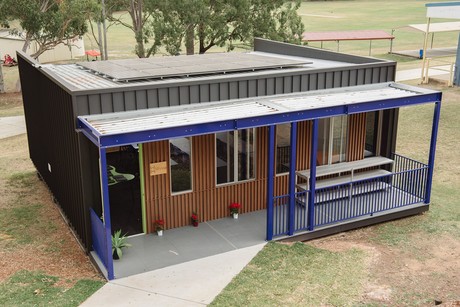 Built by Hivve Technology, the portable and climate-controlled classroom is powered by a combination of rooftop solar and a Tesla Powerwall 2 battery, making it totally energy self-sufficient. Hivve also has the ability to feed excess power back into the school network, powering a minimum of two other classrooms.

“The Hivve classroom concept has the potential to be a game changer in how our children are educated, providing a completely sustainable solution by powering all its own infrastructure — including air conditioning — while also feeding energy back into the school to run other classrooms,” added Hivve CEO David Wrench.

“This is both environmentally responsible and economically compelling, with the potential to reduce power bills for each classroom by $3000 per annum and eliminate the high costs of connection to the electricity grid as well as reducing the overall pressure on the electricity grid.

“Hivve’s smart technology gives students and teachers real-time access to its living systems — including how much energy is being generated and used, plus temperature and air quality data — enabling students to enjoy practical, real-life lessons in caring for our planet, and making it easy for teachers to control the classroom environment.” 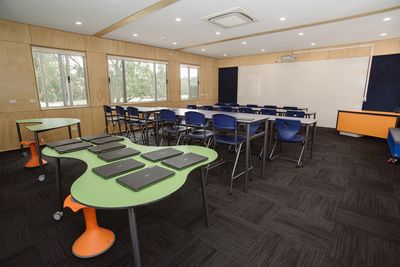 “We are delighted to officially launch this world-leading classroom technology, which has already delivered clear education benefits both through cooling the classroom in an environmentally sustainable way and creating an optimal learning environment in the classroom through Hivve’s proprietary technology,” said Bracken Ridge Headmaster Roger Atkins.

“The differences for us are very tangible and we believe Hivve is a model for the future of the classroom. There is abundant academic research on the learning benefits of cooler classrooms and the Hivve monitoring system puts the power to control this environment in the hands of the teacher.”

All three Hivve classrooms, each of which removes more than 7.4 tonnes of CO2 from the atmosphere each year, were made possible through funding from the Australian Renewable Energy Agency (ARENA). According to ARENA CEO Darren Miller, the successful trials in NSW and now Queensland open the door for more Australian schools to switch to renewable energy.

“Many schools on the Eastern seaboard are currently at capacity on grid connection,” Miller said. “This Australian-developed solution could help schools reduce costs and emissions, while also reducing reliance and demand on the grid.”

Wrench added, “ARENA has been the perfect partner for this initiative, demonstrating the innovative thinking around traditional energy challenges this government has been bringing.”

The ARENA-funded pilot will run for 12 months, with the accumulated performance data used to demonstrate how renewable energy could power schools and reduce schools’ energy costs. Hivve already expects to roll out classrooms in NSW and is in discussion with other states.