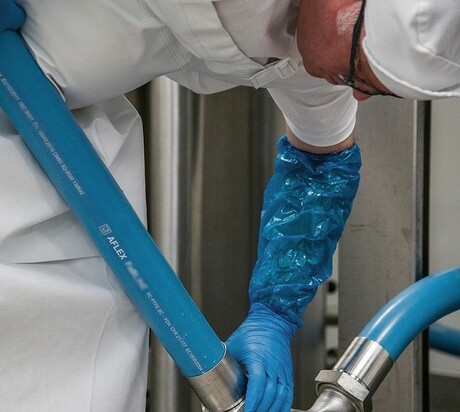 When a small cheese producer in Cornwall — Padstow Cheese — could no longer keep up with demand, the company turned to a MasoSine Certa pump from Watson-Marlow Fluid Technology Group (WMFTG). The switch helped to facilitate the move to a new facility and maximise the advantage provided by upgraded dairy equipment. Thanks to its shrewd investment, Padstow Cheese has increased the quality of its products, grown yield and shortened processing time by up to 2 hours a day.

Lawrence Reynolds and his wife began developing cheese in 2014 as a hobby after they attended a cheese-making course together. The pair took their cheese to a few potential outlets, including the local pub — The Mariners in Rock — which at the time was in partnership with high-profile Michelin Star chef Nathan Outlaw. Within a month of presenting the cheese, it was part of the menu.

“The demand for our cheese soon outpaced what we could produce,” said Reynolds. “Chefs were buying it from retailers at full price just to get hold of some.”

Padstow Cheese simply had to expand, so it took up a unit in 2019 that Reynolds converted into a dairy.

“We went from a 600-litre vat operation, to 2000 litres, and began producing cheese more days a week, essentially quadrupling our output,” he said.

The company’s core product, Cornish Jack, is a stand-alone cheese developed from scratch. Reynolds describes Cornish Jack as an Alpine, Swiss-style cheese, but with a unique flavour profile. The company also produces Old Jack, a mature version of Cornish Jack. In addition, Padstow Cheese has a 50:50 collaboration with Sharp’s Brewery of Cornwall, whereby a special cheese (50 Jack) has been developed that is brined and washed in the brewery’s beer, making it perfect to nibble with a glass of ale.

“To produce our cheese we originally had an off-the-shelf centrifugal pump with two speeds: on and off,” explains Reynolds. “Due to its lack of control and aggressive nature, the centrifugal pump created a lot of foam and air bubbles, which is detrimental to quality. In addition, the pump would damage the curd with its ‘chopping’ action.”

The company’s process took a major step forward with the introduction of a prepress, and knew that a better pump would be a perfect complement to this new equipment.

“We needed a better pump, not just to pump the milk into the curdling tank, but to transfer the curd from the vat to the prepress,” said Reynolds. “Our research led us to WMFTG and others from overseas. However, WMFTG were great from day one. They listened to our requirements and took a real interest, despite our operation being much smaller than the large dairies they are more familiar with serving. They helped specify the right pump in terms of its size and speed capabilities.”

To help Padstow Cheese confirm the capabilities of its proposed investment, WMFTG supplied a loan pump in October 2020: a MasoSine Certa 200 complete with samples of 2″ diameter Aflex FaBLINE hose[JL(U1].

“Within a month we knew that the Certa 200 was perfect for our needs, so we placed an order,” said Reynolds. “The product transfer is extremely gentle, while we also get far less aeration. In addition, by pumping through the hose we can spread the curd evenly as it fills up the prepress.”

Notably, the Certa 200 and FaBLINE hoses have combined to improve the ‘eyes’ of the cheese. Rather than air, eyes in the cheese now form by CO2 created by starter culture bacteria that is purpose-introduced. As the cheese ages and ripens, the CO2 forms small bubbles that spread through the cheese and would escape but for the rind. This rind is tough enough that it traps the bubbles inside the cheese and creates eyes. Today, better eye size and improved texture is opening up new markets and attracting new customers.

By introducing a Certa pump, the company has also decreased the amount of fines in its cheeses, in turn increasing yield. By the very nature of their operation, certain pump types will break curd into fines. The generation of cheese fines is in direct relation to production loss, which means plants produce less cheese from a certain quantity of milk.

“We haven’t calculated it accurately, but I estimate that our yield is up by at least 8–10%,” states Reynolds. “In addition, wastage is down and process speed has increased because the Certa is more efficient at transferring both milk and curd. The pump, in combination with FaBLINE hoses, is saving 90 minutes a day in production time.”

Aside from the performance attributes provided by the Certa 200 and Aflex hose, Reynolds highlights cleaning as another major advantage of his investment.

“The Certa pump is so easy to clean, unlike our previous centrifugal pump, which was a nightmare,” he said. “In addition, the smooth construction of Aflex FaBLINE hoses means we can flush the cleaning products through and rinse out very easily.”