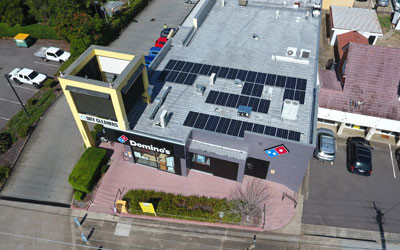 Domino’s Pizza Enterprises (DMP) is claimed to be Domino’s largest franchisee outside of the USA, holding master franchise rights to the Domino’s brand and network in Australia, New Zealand, Belgium, France, The Netherlands, Japan, Germany, Luxembourg and Denmark. With a network of more than 2500 stores, the company looked to renewable energy solutions to reduce electricity costs as well as operational impacts on the environment.

Following implementation of the strategy at Domino’s Aspley in 2017, results have shown an incredible 34% reduction in energy usage and 48% saving in electricity costs.

Domino’s Australia and New Zealand CEO Nick Knight said Domino’s had plans to roll out renewable energy solutions to more stores, with Domino’s Aspley ‘lighting the way’ for others to follow.

“We are really excited that Domino’s Aspley is now sourcing power from renewable energy and are thrilled with the results. We are looking to implement this strategy in more stores across our network, with Domino’s Ballina, Noarlunga and Kelso already operating with solar power systems and energy demand controllers,” Knight said.

“We currently have 70 stores with energy demand controllers installed — which de-energise nonessential electrical equipment during peak power usage — and an additional seven stores already in the works.

“These stores have seen energy reductions of up to 22% and electricity savings of up to 27% in the past 12 months alone.”

CSS General Manager Earle Strong said the future of Domino’s renewable energy strategy was bright, benefiting both the environment and stores with its low-maintenance approach.

“Solar energy is increasing in popularity for many reasons, mainly because of its versatility, sustainability and safety benefits.

“The power consumption savings we have seen at Domino’s Aspley have been incredibly encouraging and we look forward to installing renewable energy solutions into more Domino’s stores across Australia.”