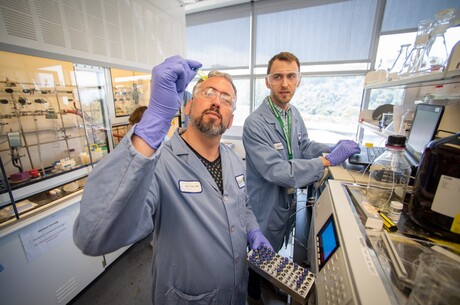 The average Australian uses 130 kg of plastic each year, only 9.4% of which is recycled. Most of our unwanted plastics end up in landfill but, devastatingly, up to 130,000 tonnes will find their way into our waterways and oceans.

An even worse situation exists in the US, where only about 2% of plastics are fully recycled. But a new plastic has potential to change this.

Invented by a team led by Corinne Scown, Brett Helms, Jay Keasling and Kristin Persson at the Lawrence Berkeley National Laboratory (Berkeley Lab), poly(diketoenamine), or PDK, has all the convenient properties of traditional plastics without the environmental pitfalls — because unlike traditional plastics, PDKs can be recycled indefinitely with no loss in quality.

The team has released a study showing what can be accomplished if manufacturers use PDKs on a large scale: PDK-based plastic could quickly become commercially competitive with conventional plastics, and the products will get less expensive and more sustainable as time goes on.

“Plastics were never designed to be recycled. The need to do so was recognised long afterward,” explained Nemi Vora, first author on the report and a former postdoctoral fellow who worked with Scown. “But driving sustainability is the heart of this project.

“PDKs were designed to be recycled from the get-go, and since the beginning the team has been working to refine the production and recycling processes for PDK so that the material could be inexpensive and easy enough to be deployed at commercial scales in anything from packaging to cars.”

The study presents a simulation of a 20,000 tonne/year facility that puts out new PDKs and takes in used PDK waste for recycling. The authors calculated the chemical inputs and technology needed, as well as the costs and greenhouse gas emissions, then compared their findings to the equivalent figures for production of conventional plastics.

“These days, there is a huge push for adopting circular economy practices in the industry. Everyone is trying to recycle whatever they’re putting out in the market,” Vora said. “We started talking to industry about deploying 100% infinitely recycled plastics and have received a lot of interest.”

Helms added, “The questions are how much it will cost, what the impact on energy use and emissions will be, and how to get there from where we are today. The next phase of our collaboration is to answer these questions.”

Current mechanical processes for recycling plastic involve melting down the plastic and then reshaping into new products. When many plastics are melted together, the polymers become mixed with a slew of potentially incompatible additives, resulting in a new material that is much lower quality than newly produced virgin resin from raw materials. For this reason, less than 10% of plastic is mechanically recycled more than once.

In the case of PDK plastics, the resin polymers are engineered to easily break down into individual monomers when mixed with an acid. The monomers can then be separated from any additives and gathered to make new plastics without any loss of quality. The team’s earlier research shows that this ‘chemical recycling’ process is light on energy and carbon dioxide emissions, and can be repeated indefinitely, creating a completely circular material life cycle.

Despite these incredible properties, PDKs also need to be convenient. Recycling traditional petroleum-based plastic might be hard, but making new plastic is very easy.

“We’re talking about materials that are basically not recycled,” said Scown, a staff scientist in the Berkeley Lab’s Energy Technologies and Biosciences Areas. “So, in terms of appealing to manufacturers, PDKs aren’t competing with recycled plastic — they have to compete with virgin resin. And we were really pleased to see how cheap and how efficient it will be to recycle the material.”

The team’s report, published in Science Advances, models a commercial-scale PDK production and recycling pipeline based on the plastic’s current state of development.

Scown said that “once you’ve produced the PDK initially and you’ve got it in the system, the cost and the greenhouse gas emissions associated with continuing to recycle it back to monomers and make new products could be lower than, or at least on par with, many conventional polymers.”

Recycled PDKs are already drawing interest from companies needing to source plastic. The team’s market research shows that the best initial application for PDKs lies in markets where the manufacturer will receive their product back at the end of its lifespan, such as the automobile industry (through trade-ins and take-backs) and consumer electronics (through e-waste programs). These companies will then be able to reap the benefits of 100% recyclable PDKs in their product: sustainable branding and long-term savings. The team hopes to expand PDKs into shorter-lived, single-use goods such as packaging.